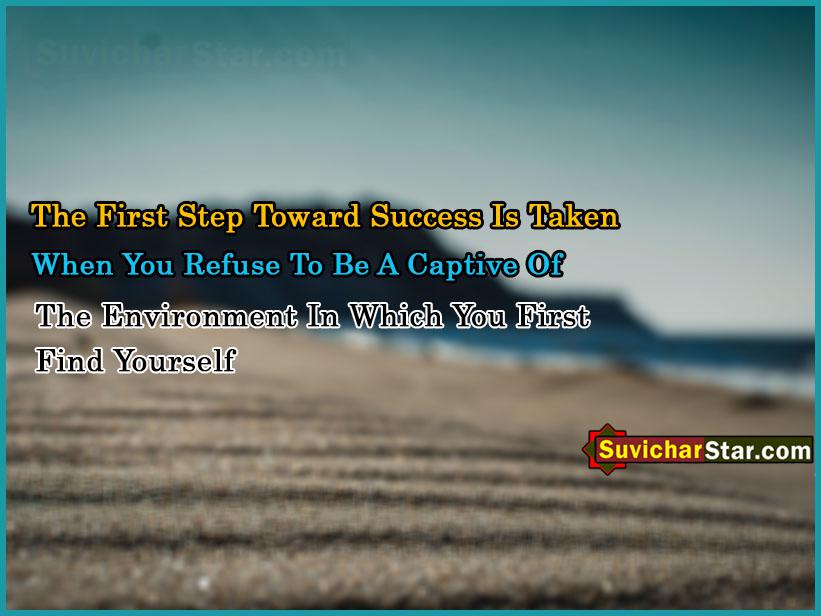 The First Step Toward Success Is Taken
When You Refuse To Be A Captive Of
The Environment In Which You First Find Yourself
Success is focusing the full power of
all you are on what you have a burning desire to achieve.
Success is one percent inspiration,
ninety-nine percent perspiration
God gave us two ends: one to sit on and one to think with.
Success depends on which one you use.
Heads you win; tails, you lose
If A equals success, then the formula is
A equals X plus Y and Z, with X being work, Y play,
and Z keeping your mouth shut
Take up one idea. Make that one idea your life
think of it, dream of it, live on that idea.
Let the brain, muscles, nerves, every part of your body
be full of that idea, and just leave every other idea alone.
This is the way to success
At each day’s end write down the six
most important things to do tomorrow;
number them in order of importance,
and then do them
You have to work hard to get your thinking clean to
make it simple. But it’s worth it in t
he end because once you get there,
you can move mountains
You can make success as complicated as you want,
but it doesn’t have to be that wayAs Jobs says
making success simple isn’t necessarily easy
but it is very powerful.
f you’re unhappy, don’t blame it on a lack of success.
Happiness is all about perspective.
If you’ve got a cheerful outlook,
it doesn’t matter if you’re a success or failure